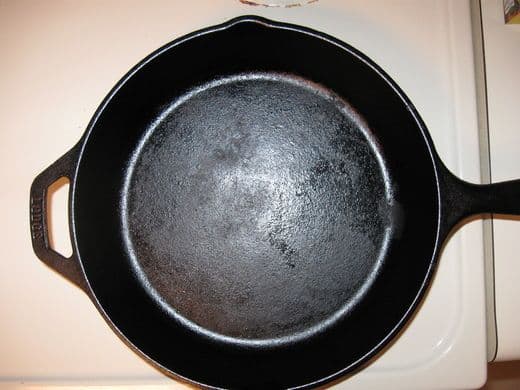 It is why we have brought you this detailed guide that will provide our readers with several methods to clean residue off cast iron skillet. When trying to clean anything off a cast-iron skillet, you must know how to identify the difference between a black residue and a black coating.

The black coating tends to show up after several uses, and you can consider seasoning the skillet again using vegetable oil after some time. First, however, you need to know what makes the black residue show up on the cast iron skillet, and that is what we want to talk about next.

Certain oil like flaxseed oil, walnut oil, and olive oil tend to have a lower smoke point, so they shouldn’t overheat. However, when they tend to overheat, they produce carbon deposits which later form a black residue on the iron skillet.

2. When Food Sticks To The Skillet When Cooking

If the skillet isn’t well seasoned, food will get stuck on it, and it will end up causing a black residue. Like we mentioned earlier, you must season your skillet properly before use, and this is because of the protective layer it creates on the skillet to prevent food from sticking to the skillet.

Black residues are not harmful like people claim them to be, and this is because they are formed by carbon deposits that occur as a result of overheating. However, even though it might not be harmful, nobody enjoys eating and tasting carbon deposits. It explains why it is important for skillets to be thoroughly cleaned to get rid of black residues. So how can you clean black residue off from a cast-iron skillet?

How To Clean Residue Off Cast Iron Skillet 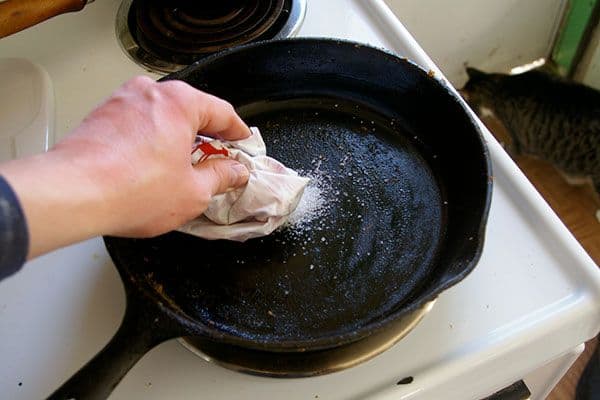 You can use these household items to remove residue from cast iron skillet, and they can be done in the following steps.

1. Pour a little amount of baking soda or salt into the skillet, then add some dish soap and scrub off using water

2. The added dish soap will eliminate the oil, while the baking soda is responsible for getting rid of the carbon residue based on its abrasive power

3. The pan should be rinsed off using warm after scrubbing, and the process should be repeated if there are still black carbon residue traces.

4. The skillet should be rinsed and dried off using a paper towel, but it is also recommended that the skillet is heated in the oven for a while for proper drying.

Method 2 – The Self Cleaning Oven Method

1. You should move the oven racks to the bottom so you can position the skillet inside the top shelf.’

2. You should run the self-cleaning cycle for as long as three to four minutes, but this is dependent on the oven setting

3. To ensure that all black residue is removed, you can repeat the self-cleaning oven process again

4. When you are done, be patient till the cast iron skillet is cold before removing it from the oven and scrub off any remaining chad left on the skillet

When using this method, users should have in mind that this process is hazardous. It is because it is a boiling process with the possibility of cracking the cast iron skillet, so this method should not be done frequently but less often. It is very effective, simple to do, but you should do it less often because it subjects older skillets to cracks.

Conclusion on How To Clean Residue Off Cast Iron Skillet

The above method we just finished talking about is the best and effective method anyone can adopt when trying to get rid of black residue from cast iron skillets. You can tell from the steps that these methods are easy and simple to engage in.

Adopting any of these methods will help in making sure you do not constantly go to the market to shop for a cast-iron skillet, or you do not have to constantly deal with black residue stains on your cast iron skillet.

Another essential fact you need to wear in mind when doing any of these is wearing gloves. It will save the hands from getting burned, and you mustn’t place a cold skillet into a hot oven because a rapid temperature change can cause the cast iron skillet to crack; this means you will have to shop for another cast iron skillet when you didn’t plan for it. Good luck with any of the methods you intend to adopt today.

lanarestaurant.com is my baby!. I hope it becomes yours too with my writings & reviews.

Do leave a comment!. I’m definitely going to engage with you❣️.